You Are Here: Reports about Previous Years' Lectures

On January 27, 2021, the annual Nobel Prize Lecture of the School of Business and Economics took place again - this time under corona conditions via Zoom. The event is organized by the “Förderverein der Wirtschaftswissenschaften der RWTH”, which has been promoting cooperation between business and science in Aachen for over 30 years.

Prof. Christian Grund from the Chair of Human Resource Management and Personnel Economics welcomed the audience to the seventh Nobel Prize Lecture and gave a preview of the lecture in which the Nobel Prize winners from 2012 and 2020 would be presented.

He then gave the floor to Prof. Thomas Kittsteiner from the Chair of Economics (Microeconomics), who introduced the Nobel Prize from 2020 on the topic "Beyond eBay and Sotheby's - The Search for the Perfect Auction". First, he addressed the topic of market design and explained why the topic is nevertheless of high importance next to supposedly more important global problems and why research in this research field deserved the Nobel Prize in economics. Prof. Kittsteiner then turned his attention to the Nobel Prize winners Paul R. Milgrom and Robert B. Wilson. They received the Nobel Prize for improvements in auction theory and the invention of new action formats. The U.S. researchers used their models to show that auctions must be designed differently depending on the outcome they are intended to achieve. In this case, the focus is usually not on maximizing profits, but on security of supply, among other things. This means that not the highest bid wins but those that satisfy multiple societal needs for the transaction.

In the second part of the presentation, Prof. Britta Peis from the Chair of Management Science introduced the 2012 Nobel Prize awarded to Lloyd S. Shapley and Alvin E. Roth on the topic "Kidney Transplants, Day Care Centers, and Stable Partnerships - Approaches and Applications of Matching Theory." They received the Nobel Prize for the theory of stable distributions and its empirical applications and further developments. Both researchers used so-called game theory, which tries to make human decisions comprehensible and which can be applied to the economic market. The researchers' socially relevant findings help, for example, in allocating applicants for university places to universities or organ donations to patients who are waiting for a donor organ.

The event ended with the opportunity to ask questions and a final discussion.

On January 22, 2020, the RWTH's Association of Friends and Supporters of the School of Business and Economics ("Förderverein der Wirtschaftswissenschaften der RWTH") invited interest parties to the sixth Nobel Prize Lecture in the Couvenhalle. For more than 30 years, the Association has been promoting cooperation between business and science in Aachen. It establishes contact between managers, companies, teachers, students, and graduates to ensure a regular exchange of ideas for the benefit of society as a whole.

First, the Nobel Prize in Economics from 1993 was presented. Robert Fogel and Douglass North won it for the renewal of research in economic history by applying economic theory and quantitative methods to explain economic and institutional change. The renewal has made it possible to gain new insights into the past and also to negate irrelevant theories. Their work has expanded our knowledge and understanding of how, why, and when economic change occurs in fundamental research areas.

In the second part of the lecture, the three economists Abhijit Banarjee, Esther Duflo, and Michael Kremer were presented, who received the Nobel Prize for Economics in 2019 for their experimental approach to fighting global poverty. According to the Royal Swedish Academy of Economics, the Nobel Laureates' research has significantly improved our ability to fight global poverty. Kremer had been researching the learning outcomes of schoolchildren in Kenya since the 1990s, and the trio of researchers then carried out similar studies on other problems in other countries. In the meantime, the methods of the three researchers dominate development economics.

The audience were able to pose any questions they had, and the evening was rounded off with refreshments.

On January 23, 2019 the RWTH's Association of Friends and Supporters of the School of Business and Economics ("Förderverein der Wirtschaftswissenschaften der RWTH") invited to a Nobel Prize Lecture in the Couvenhalle to present the most important findings of the Nobel Prize Laureates for Economics in 2018, 1997 and 1990.

For more than 30 years, the RWTH's Association of Friends and Supporters of the School of Business and Economics has been promoting cooperation between business and science in Aachen. It establishes contact between managers, companies, teachers, students and graduates to ensure a regular exchange of ideas for the benefit of society as a whole.

Prof. Dr. Almut Balleer and Prof. Dr. Wolfgang Breuer hold the floor. They welcomed the numerous guests to the Nobel Prize Lecture, which was held for the fifth time.

The 2018 Nobel Prize for Economics was awarded to two US economists: William D. Nordhaus and Paul M. Romer. Both were honored for their research on climate change and technological innovation. In particular, they contributed to a better understanding of sustainable economic growth in the context of climate change and technological progress. In doing so, they had "developed methods that provide answers to the most pressing challenges of our time," said the Royal Swedish Academy of Sciences.

In 1990, Harry Markowitz, Merton Miller and William Sharpe were awarded the Nobel Prize in Economics. This was due to their pioneering work on the theory of financial economics.

The 1997 Nobel Prize winners were Robert C. Merton and Myron S. Scholes. In collaboration with Fischer Black, they developed formulas for the valuation of stock options. Their methodology has paved the way for economic valuations in many areas. They have also created new types of financial instruments and enabled more efficient risk management in society.

The event was concluded with a drink, inviting the guests of the fifth Nobel Prize Lecture to further discourse. 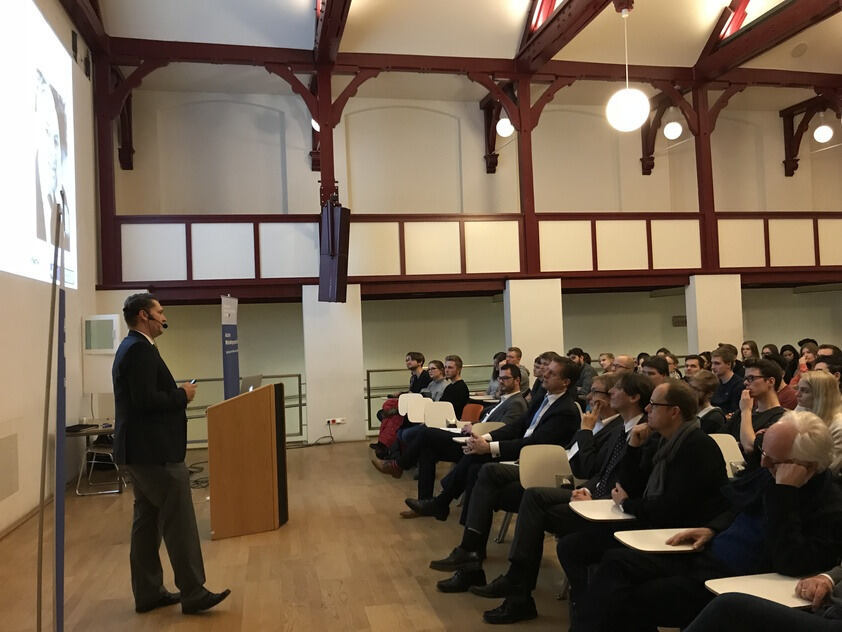 On January 22, 2018, the Association of Friends and Supporters of the School of Business and Economics ("Förderverein der Wirtschaftswissenschaften der RWTH") welcomed guests to the 4th "Nobel Prize" Lecture. For over 30 years, the Association has been maintaining and intensifying ties between academia and business and industry in the city of Aachen by establishing contacts between managers, firms, university lecturers, students, and graduates and encouraging a regular exchange of interesting ideas from which all of them can profit.

The School's Dean, Professor Thomas Kittsteiner, welcomed an audience of about 200 to the University's Couven-Halle building. Then, Wolfang Mainz, as representative of the Association, and the School's Professor Peter Letmathe addressed the guests.

Professor Thomas Lontzek introduced the audience to Nobel Prize Laureates 1972, Kenneth J. Arrow and John R. Hicks, highlighting their pioneering work on general equiilibrium theory and welfare economics. Professor Lontzek placed the focus of his presentation specifically on the academic career and research work of Arrow. In his seminal work on collective decision making - on account of which he became the founder of the research field of social choice - Arrow looked at the construction of a social welfare function and found mathematical evidence for there not being any ideal decision rule in the case of collective decision making.

In the second presentation, the School's Professor Robert Böhm introduced the audience to Richard Thaler, Nobel Prize Laureate for Economics 2017 in recognition of his "contributions to behavioral economics". Professor Böhm also gave his audience some valuable tips - inspired by Thaler - on how to win a Nobel Prize! Böhm emphasized that Thaler's research had not only fostered behavioral economics but also the practical application of behavioral economics findings. Thaler coined the term "nudging" - which describes the way in which people's behavior can be steered in a desired direction without the use of prohibitions, harsh restrictions to their freedom of choice, or economic incentives. Professor Böhm addressed this particular phenomenon in his lecture. Summing up, he suggested that a keen observation of the environment, an ability to think "outside the (economic) box", and the motivation to render scientific findings practically applicable all contributed to the success of the 2017 Nobel Prize Laureate.

The audience were able to pose any questions they had, and the evening was rounded off with refreshments. The initiators of the event, Professor Peter Letmathe and Wolfgang Mainz thanked their guests for having come, and look foward to next year's event. This year's "Nobel Prize" Lecture was organized by Erik Esser and Matthias Schinner. 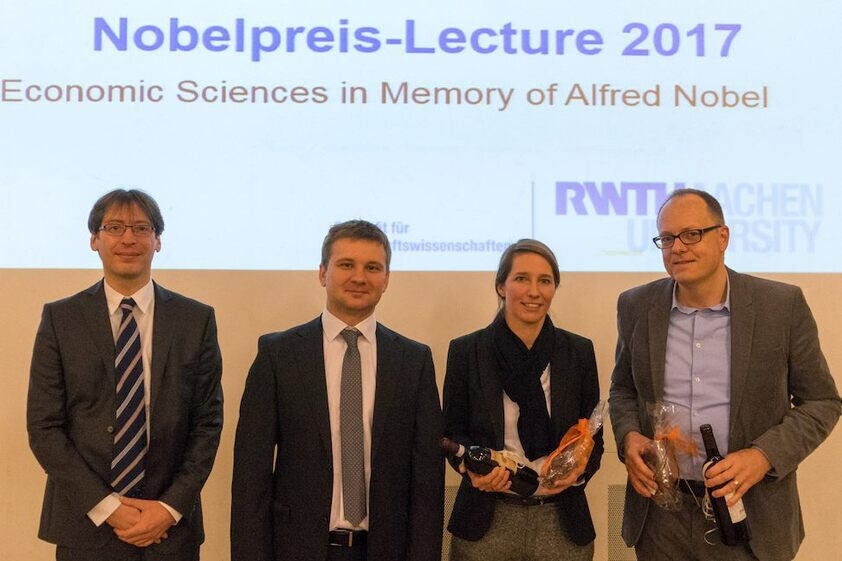 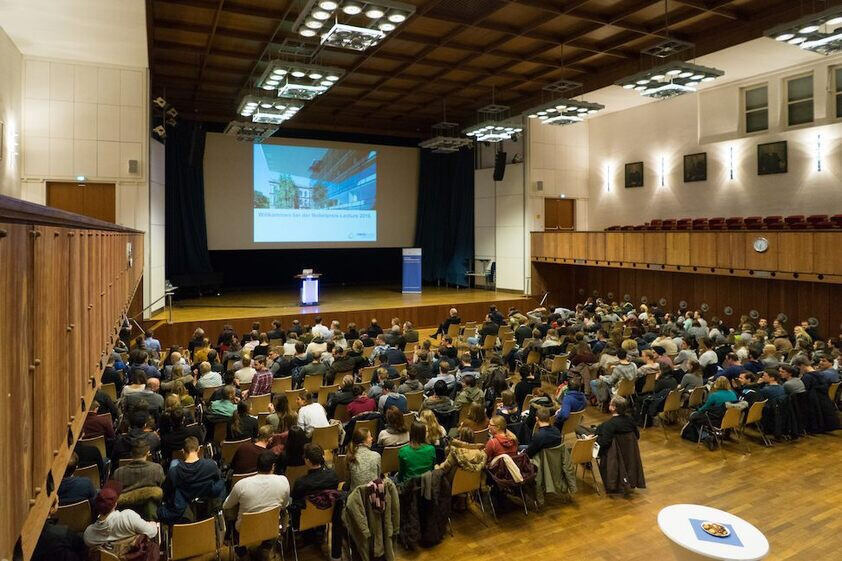 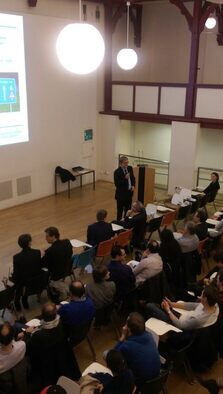