You Are Here: Volleyball successes of Bettina Rollersbroich 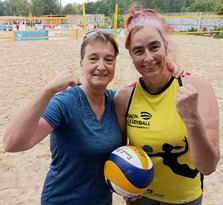 On September 11 and 12, the German Beach Volleyball Championships for Senior Women took place in Berlin for the 13th time. In the age group over 49 with a total of 14 teams, our school management administration Bettina Rollersbroich competed for the 11th time, this time again with her standard partner Ute Frantzen. After the two had already become German champions in 2009, 2011, 2014, 2018 and 2020, they wanted to at least get back on the podium this year.

The duo finished the preliminary round on Saturday with 2 wins (2:0 and 2:1) as group winners. After another 2:0 win on Saturday evening and a 2:0 win on Sunday morning, the semi-final was perfect. There, the beach duo didn't let anything go to waste and also won in 2 sets, so that the much-celebrated entry into the final was certain.

Here they met - as already in the preliminary round - the duo Groß/Heissel, against whom they had to accept the only set loss on Saturday. In the final, they now won clearly with 2:0. Title defended, GERMAN CHAMPION, and that already - besides a 2nd place in 2016 and 2018 - for the 6th time.